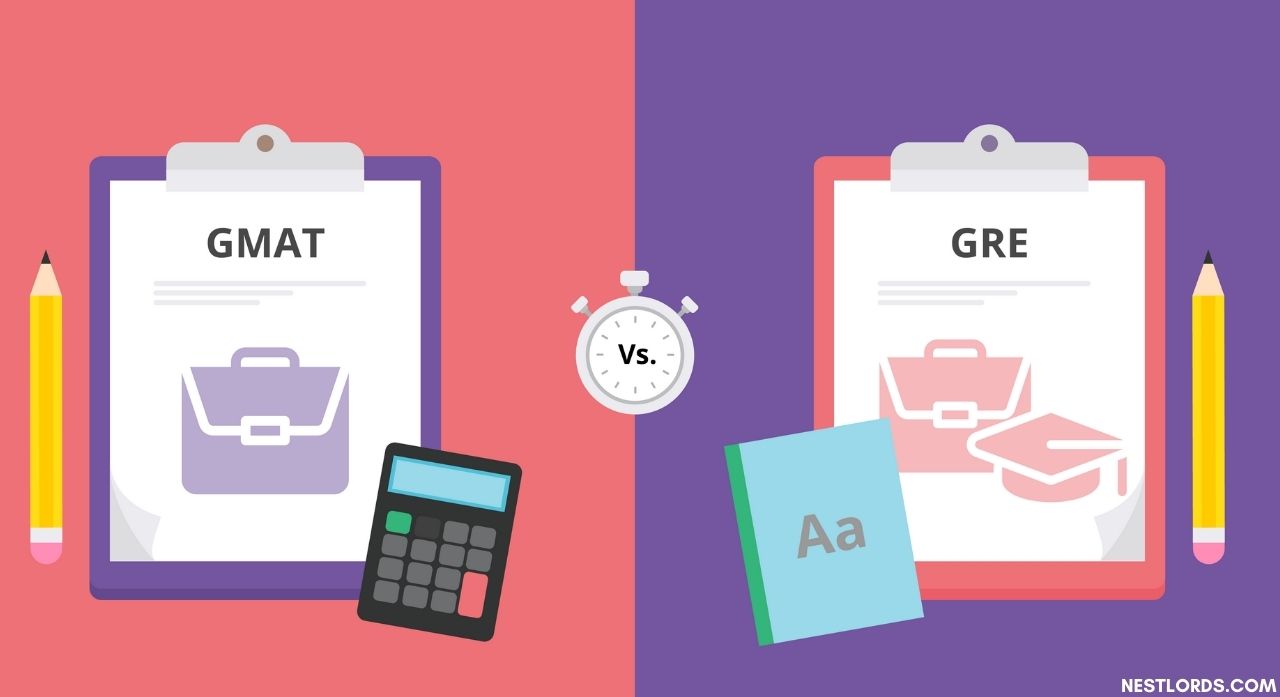 Are you planning on applying for business school and facing the dilemma which standardized test to start prepping for? You are not alone. The GMAT vs GRE question has been one which students have been asking themselves for years since many schools began requiring GRE scores rather than GMAT scores from the applicants.

The truth is, there are ways to decide which of the two tests GMAT or GRE, is a better option for you.

Read on to find out what the differences and similarities between the two standardized tests for applying for business school are, and how to pick the one which will provide you with a better chance of getting accepted into the MBA program and school of your dreams.

This is a standardized test which is used for applying for MBA programs, and which consists of the following sections:

The subscores from the verbal and quantitative sections of the test form the composite score for the test. Each of these sections is scored in a scaled score from 0 to 60 in 1-point increments.

The composite score of the GMAT score has a range of 200 to 800 in 10-point increments.

The GMAT is computer-based and is an adaptive test. Adaptive testing will adapt each next question to a slightly more challenging level if you get the answer right, and will show you an easier question if you get the previous one wrong.

You cannot go back and correct an answer in the quantitative and verbal sections when you take the GMAT.

The idea behind adaptive testing is to get more accurate scores and assessments of the skills and knowledge of the test-taker in one test.

The test lasts for 3 hours and 7 minutes.

The validity of the GMAT

Your GMAT score will be considered valid for 5 years after taking the test.

This is a standardized test which is accepted as part of the admissions package by a wider variety of grad schools, rather than just MBA programs like the GMAT scores.

It consists of the following main sections:

The subscores from these three sections are combined into a composite score. The composite score of the test has a range of 260 to 340 points in 1-point increments.

The test is usually computer-based. It is a section-adaptive test which will adapt each next section (verbal and quantitative) according to your performance on the previous one. So your overall performance in the first section will determine the difficulty level of the next one.

On this test, you can return to any question you have already answered within the same section.

The test lasts for 3 hours and 45 minutes

The validity of the GRE

Your test score will be valid for 5 years from the test date.

GMAT vs GRE – what are the main differences

Although both the GMAT and GRE serve for applying for graduate programs and schools, there is some difference between GMAT and GRE, including:

GRE or GMAT which is easier to take?

If you want to know whether GMAT or GRE which is easy for you to take, the truth is that given that both tests are designed for prospective grad students, both tests are relatively difficult. Here is a comparison of the difficulty of the main sections of the GMAT and GRE tests which may help you choose between GRE or GMAT which is easy:

The GMAT focuses more on grammar, while the GRE focuses on vocabulary more.

The GMAT has a single verbal section with 36 questions, and the GRE has two subsections with 20 questions each (a total of 40 questions).

The GMAT verbal section consists of three types of questions, including:

The GRE verbal part of the test consists of three types of questions, including:

Overall, the verbal sections of both tests are similar in difficulty and are designed to test similar skills, including reading comprehension, grammar, and critical thinking.

GMAT focuses more on grammar and on reasoning testing, while the GRE focuses more on vocabulary, so take into consideration your verbal strengths to decide is GMAT easier than GRE.

The GRE is considered as the test with the slightly more difficult verbal test section of the two, especially for non-native English speakers. So, we can conclude that the verbal part of the GRE and GMAT tests are pretty similar, with the GRE being a little more challenging for some.

The questions included in the GMAT quantitative section include:

The questions included in the GMAT integrated reasoning part include:

Many of the questions include multiple components, which makes them more challenging if you want to be awarded points.

Most questions are multiple-choice, but there are some questions where you will need to enter a specific number as an answer. There are also some quantitative comparison multiple-choice questions that require that you determine whether one choice is larger than the other, or if they are equal, or if such a relationship cannot be determined.

When comparing the math questions of the GMAT v GRE, we can conclude that both tests have two quant sections each. The GMAT has 43 questions (31 for quant and 12 for integrated reasoning), and the GRE has 30 questions.

Overall, while neither of the two tests includes problems from higher math like calculus, the GMAT and GRE quantitative sections are relatively difficult. The quant sections of the GMAT are considered to be more difficult than those of the GRE test. This is especially true for the data sufficiency questions in the IR section, which require critical thinking and analysis skills and are different from other math questions you have likely stumbled upon.

So, if the quantitative section is not your strong point, then the answer is GRE easier than GMAT is yes.

There is one main difference in the GMAT vs GRE MBA comparison when it comes to the analytical writing section, and that is that the GMAT has one 30-minute essay, while the GRE has two 30-minute essays.

The GMAT writing section requires test-takers to complete one essay in which they should evaluate the strengths and weaknesses of the provided argument, as well as ways for it to be improved.

The GRE writing section requires students to write two essays for 30 minutes each. The first one is an “analyze an argument” essay very similar to that of the GMAT. The second one is an “analyze a task” essay where test-takers will need to provide their own opinion on an argument provided and to justify their stance with provided evidence.

So, in regard to the writing sections there is no definitive answer to the question is the GRE or GMAT easier because their difficulty level is about the same. The only thing that some people may find more challenging is the longer time for the two essays which need to be written at the GRE which can help determine is GMAT or GRE easier to take.

But if you have done your GMAT test prep or GRE test prep, you should be aware of what types of requirements the evaluators of the essays of each test have and what they expect to see written by the test-takers.

GMAT vs GRE – which one do business schools prefer?

Are you wondering about GRE vs GMAT for MBA application? The truth is, that the dilemma GMAT vs GRE for MBA and should I take the GMAT or GRE if I am applying for a business program depends on the school, as well as on your preparedness for GMAT, GRE or both tests.

Some business schools do prefer the GMAT scores over GRE scores, mainly because of the specifics and the difficulty of the quantitative and integrated reasoning sections of the former. The reason is that skills like data interpretation or multi-part reasoning will be required for most subjects related to business schools and programs.

Another reason why many business schools appreciate GMAT scores being submitted more than GRE scores is the fact that the GMAT test is designed specifically for business schools, and taking such a test shows a commitment towards this discipline specifically. At the same time, the GRE scores can be used for applying for most types of grad schools.

Also, business school admissions offices are more familiar with the GMAT than the GRE.

Thankfully, the ETS offers a GRE to GMAT conversion calculator which allows students and schools to get an approximate score for GMAT of a candidate who has applied with a GRE score.

With the GRE conversion to GMAT scores, business programs can get a nearly accurate idea of how the applicant would score at the GMAT.

Still, according to a recent survey, about 74% of the business schools have claimed that they have no preferences of one test score over another when it comes to GRE vs GMAT. So, you can do some practice tests and research to determine which is easier GMAT or GRE for you, and focus on prepping for the GRE, GMAT , or both.

Your focus should be achieving the highest possible GRE, GMAT score, which is what matters when it comes to beating the competition for the spot in the business school of your dreams.

GMAT vs GRE – which one to choose?

The best thing to do when deciding whether to take the GRE or GMAT is to consider the program or school you are applying for and determine whether it has a preference or requirement of one of the two tests.

If there are no preferences for either GMAT or GRE scores, then it is advisable that you take a practice test of each type to determine which is easier GRE or GMAT for you and which you can score more points on.

If you are not sure whether you are going to business school or another grad school, then it makes sense to take the GRE test. Still, if you are applying for a business program, then the GMAT test is the one that is more likely to make a better impression and have an effect on your appliance and admittance to the program.