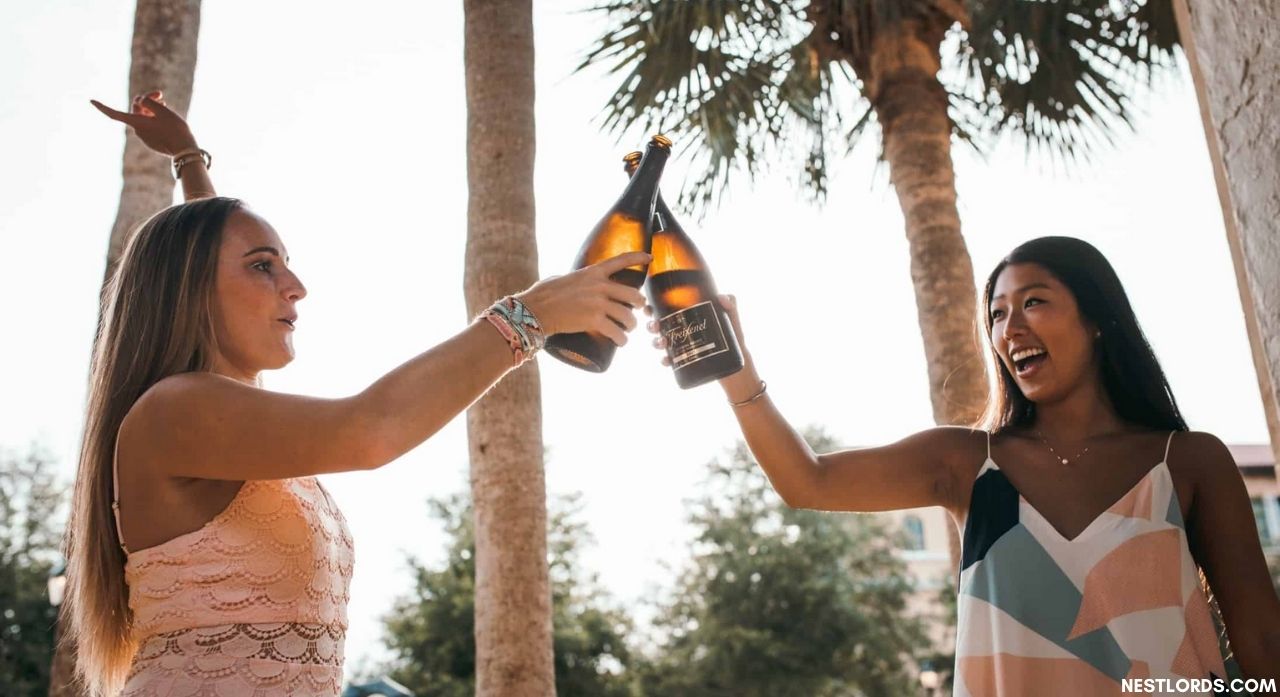 We all know how fun spending the night with your friends can be, especially when you are passing the time with a couple of drinks. When these drinks are accompanied by a fun drinking game, though, you would most probably have an even better time full of laughs and unforgettable memories. We know you’ve tried it!

However, sometimes, it’s only you and one other friend, and it is hard to find a drinking game for 2 people only. Well, if the weather is bad or it is dark outside and going on a picnic is not an option, we are about to introduce you to the top 12 best 2 person drinking games that will turn your evening into the time of your life! Now pour yourself a drink, and let’s get started!

Two Truths and a Lie

If you want to play drinking games for 2 with someone you don’t know that well, “Two Truths and a Lie” is the ideal way to get to know them. The rules of this drinking game are very simple. You need to think of 3 facts about you or 3 things that have happened to you, and two of them must be true, whereas the other one must be a lie. The players need to take turns guessing which one is a lie, and if they guess correctly, the other player will have to drink. If, however, their guess is incorrect, they will be the ones who have to drink.

This is one of the easiest drink games for two that is also super fun! Moreover, this is the perfect opportunity to learn interesting facts about your new friend, just like “Never Have I Ever”. Of course, this drinking game for two can be modified to play with more than two people, so next time you are in a bigger group, you could also try it!

We bet there isn’t a single teenager who hasn’t heard of this drinking game, and most probably, who hasn’t played it. Nowadays, there are many games apps available online with ready questions and dares, but we definitely prefer the old-fashioned drinking game.

Now, here are the drinking game rules: When it is your turn, you have to ask the other player if they choose dare or truth. If they say “dare,” you can think of different, crazy dares that your companion will have to do- run around the room imitating a dog, singing their favorite song out loud through the window, and so many other funny dares. If the player refuses to do it, guess what they will have to do! That’s right- drink!

If, on the other hand, the other person chooses “truth,” this will be the perfect opportunity for you to discover your friend’s deepest secrets. If the player refuses to answer your question, they will once again have to drink. Then, it will be their turn to ask you if you choose truth or dare.

First and foremost, you need to play a Harry Potter movie. Then, you will have to get your drinks ready and enjoy the game. You will have to drink whenever something of the following happens:

When we talk about drinking games for two, the first thing that immediately pops up in our minds is Beer Pong. This is the most played drink game in the world that includes beer, laughs, and a competition! It’s great to play with a crowd to cheer you up, but you can still have a lot of fun playing it at home with only one person.

There are a few things you’ll have to do to play this drinking game. You’ll need 20 cups in total, 10 for each side of the table. Once you add a small amount of beer to each cup (don’t risk it with other alcohol, as you will get drunk pretty quickly!), you need to place the cups at both sides of the table, forming a triangle (4,3,2, 1 cup.)

At parties, this drinking game is often played with teams of two people, but this modification is still a lot of fun. Aside from the 20 beer cups, you will also need a few balls for ping pong. Each person stands at their edge of the table and tries to throw their ping pong balls into the other player’s beer cups. If your friend hits your cup of beer, you will need to drink it. Respectively, if you hit the other person’s cup, they will have to drink the beer inside. The player who first runs out of cups loses.

If you search for quick drink games for 2, you may want to skip this one as it will require a little bit of preparation if you don’t have an existing Battleship board. This is a cool spin on the classic Hasbro board game. To create your own homemade board, you will need 2 pieces of paper and some stiff material (a cereal box would do) to act as the wall. You will also need 12 shot glasses (or you could simply use a coin instead of a shot glass).

Before you start playing “Battle Shots,” you will first need to draw an 8×8 grid on both pieces of paper. All of the columns need to be names A-G, whereas the rows must be numbered 1-7. In the end, you should have 49 total spots (7×7 free spaces.) Sit opposite your friend and put your piece of paper in front of you, the wall in the middle. You should not be able to see the grid of your partner.

Once each player has filled 6 shot glasses, they need to place them on their grid, forming three “ships” (one is 3 spaces long, one is 2, and one is just 1). In this drinking game for two, players need to guess the location of their opponent’s ships by thinking of different coordinates, for example, “C4”. Once any of the ships is hit, its owner needs to drink the shot glass. If you play with coins, you remove the coin and drink from your glass. The first player who is left with no standing ships loses this fun memory game that is also, fortunately, a drinking game!

This is one of the best drinking games for 2 that requires nothing more than 2 pairs of dice (look at these colorful dice by High City Books, we love them!). Each player holds a pair, and before they throw it, the other one must guess which number will be rolled. The roller, on the other hand, has to decide if the roll will be lower or higher than that guess. If they are right, the guesser drinks as many sips as the number suggested says. If the roller is wrong, they will be the ones drinking. Should the roll be exactly the same as the guess, the roller needs to finish their whole drink.

Never Have I Ever

“Never Have I Ever” is also one of the most popular drinking games for 2 teenagers play. This drinking game ‘s rules are very simple. “Never Have I Ever” starts will the first player saying a simple statement about their life. This statement starts with “Never have I ever” and needs to include something the person has never done in their life (they must not lie!) The other player must drink if they have ever done this thing.

Just like “Two Truths and a Lie” the “Never Have I Ever” drink game for 2 will help you get to know the person sitting opposite you better. Getting to know your friends while having a lot of fun and playing drinking games is the best way to spend your evenings! You could also try a “Never have I ever” card deck app if you prefer using your phones, or get yourself the “Never Have I Ever party cards” available on amazon.

This is one of the easiest card games one can learn to play. It is super fun to play, and the only thing you’ll need is a normal deck of cards (we loved the GAMELAND cards set) and, of course, alcohol! Each person gets 26 playing cards from the deck of cards. You will take turns flipping a card, and whoever draws the higher one takes the two cards and places them at the bottom of their deck. Keep in mind that Kings are lower than Aces. The game finishes the moment any of the players doesn’t have a single card in their hands.

If both of the players turn a card with the same number, this means WAR! The two players need to drink whenever there is a war. During a war, each player puts down two cards upside down and one card face up. Whoever gets a higher card wins and takes all the cards in the pile. If the cards are once again the same, the war continues until someone wins it. The player who loses the war drinks! If you wish to get drunk faster, the loser of every card flip should drink.

This is probably the easiest drinking game for 2 people. You need to place a shot glass in the center of a table and take a quarter. Just like with beer pong, where players try to bounce their quarter off the table and into the small glass. When you do, the other player must drink, and it is once again your turn to shoot. Your goal is to make 3 hits in a row and make your opponent finish their drink.

Party games are a real lifesaver when you’re wondering how to spend your nights in a fun way. Games like Power Hour Tower are amazing, but if we don’t have them, we need to think of other alternatives. So what other party games could you play besides Power Hour Tower or Monopoly? Well, read our whole article about the best drinking games (2 people only) to understand!