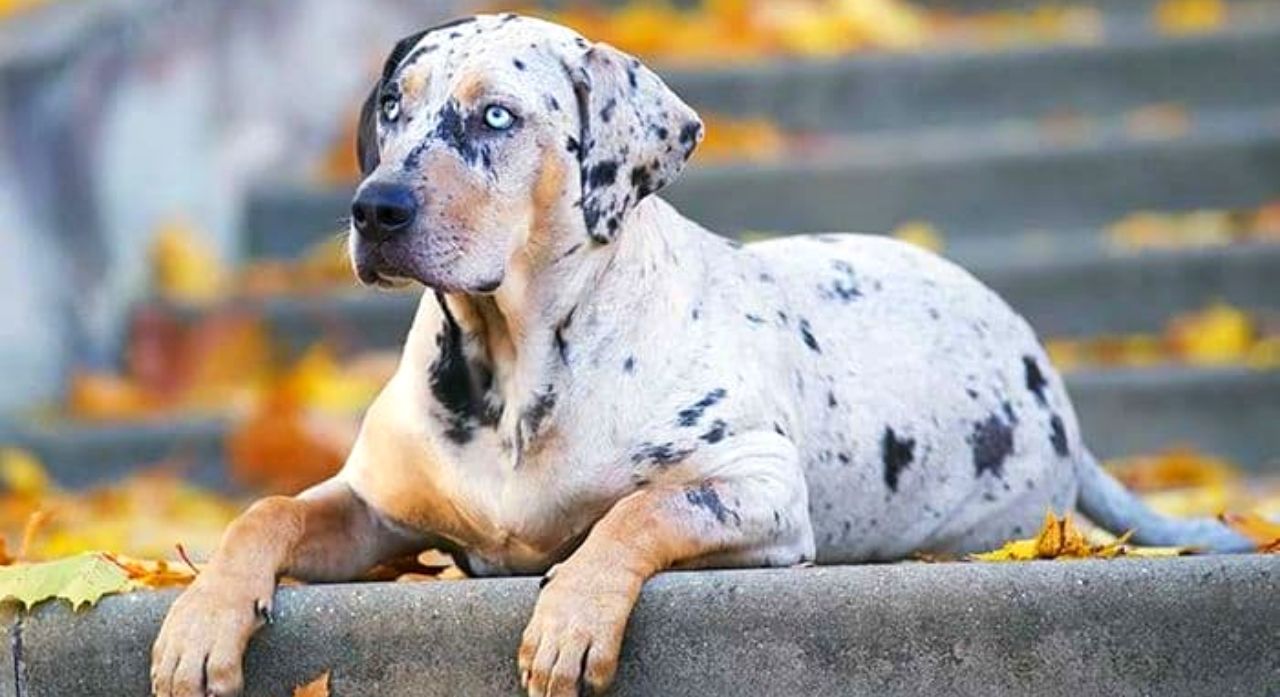 The Catahoula is a medium to large-sized dog with a recognizable and quite striking appearance. It is a loyal and hard-working dog with a strong work ethic. The Catahoula Leopard Dog was bred to work in tough areas like dense forests and swamps and needs an owner or leader who is consistent, firm, and can keep it busy.

Dogs from this impressive dog breed are very powerful and muscular, and yet surprisingly agile. The Catahoulas have high endurance levels and are multi-purpose working dogs that are very serious and tenacious when working and playful and loving at home. 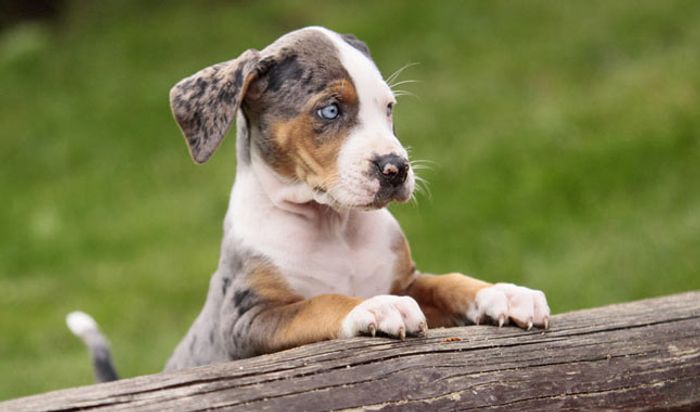 These medium to large-sized dogs have short coats with various quite striking colors and patterns. The color of their eyes can differ as well.

This hardworking dog requires quite confident and firm guidance and definitely requires socialization from early puppyhood because it has strong protective and territorial instincts, and can be quite independent.

These strong dogs will not allow being mistreated and will defend themselves if this is the case.

As soon as the Catahoula Leopard Dog learns its place in the family hierarchy, they will become excellent family dogs – loyal, affectionate, and loving.

They are tough but extraordinarily beautiful and can have solid, brindle, patched, or spotted coats in all colors. Their piercing eyes can be green, blue, amber, or brown but some dogs from this breed have “cracked” eyes which have two different colors in the same eye.

They are protective and wary of strangers and have a strong opinion about who can be trusted and who cannot. In fact, their fanciers consider them excellent character judges.

These dogs require at least one hour of strenuous exercise per day. They are companion dogs and do not like being isolated, so do not leave the Catahoula to live outside in a kennel.

They are smart dogs that definitely need an experienced owner who is consistent, patient, and firm. Once properly trained and socialized they are loyal and loving friends and companions.

The beautiful and powerful breed is definitely not suitable for first-time dog owners or timid people.

The perfect home for a dog of this breed is a house with a fenced backyard.

Although Catahoulas are gentle and patient with babies and children, you should always supervise their interactions with your kids because of their large size and weight.

If the dog is socialized in a timely and proper manner, it can get along with other pets at home pretty well. But some Catahoulas will have problems with living with other dogs or cats, so you need to be aware of that before bringing a dog from this breed to a home which already has other pets.

They can show aggression towards other dogs, especially if both are male.

History of the Catahoula Leopard Dog 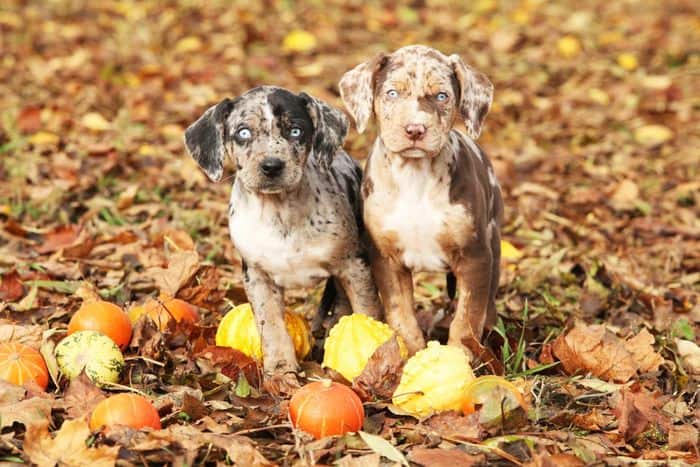 Catahoula means “sacred lake” in the Choctaw language, and the dog breed bearing this name is the only one which has originated from Louisiana. The breed comes from the area near Catahoula Lake in Northern Louisiana.

These dogs are also known as Catahoula Hog Dogs and are used as tree dogs, stock dogs, bay dogs, guard dogs, and watchdogs, but they can be excellent companion dogs as well.

The breed is a mix of various Native American dogs with Greyhounds, Bloodhounds, and Spanish Mastiffs. They were bred to drive hogs to hunters as well as cattle to butchering.

They are also known as Catahoula curs or Catahoula hounds, but as soon as the breed became the state dog of Louisiana in 1979, it was officially named the Catahoula Leopard Dog.

There are several organizations that are working to popularize and promote the Catahoula in the US, and to enable dogs from this American breed to take part in shows, testing, and certification.

The size of the Catahoula Leopard Dog

The personality of the Catahoula Leopard Dog 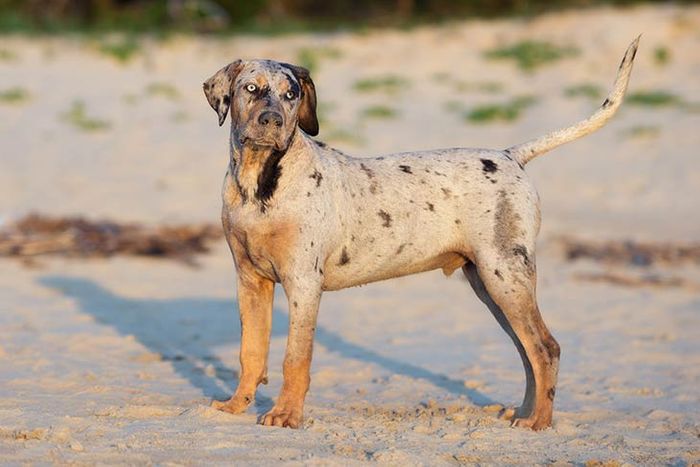 A properly bred, socialized, and trained Catahoula is not aggressive towards people. The dog can be wary of strangers and protective of its human family. Catahoulas can be aggressive towards other dogs especially males. They need to stay busy and are ready to work all day aggressively if given the guidance and the chance.

They have tracking and herding instincts and are also excellent watchdogs which will alert you by barking when a stranger is approaching.

These strong and powerful dogs need to be handled firmly and consistently by an experienced and confident leader and owner.

Once trained, they will become affectionate and loyal companions and pets.

You need to keep in mind that they need to be treated firmly but fairly because they will not tolerate being physically abused or mistreated.

Exposing the Catahoula to new people, dogs, sights, sounds, and settings is essential if you want to socialize your dog properly.

Beware that without daily exercise, and without proper training and socializing, these strong dogs can become destructive.

They fully mature at the age of 2, so make sure you keep their training and exercise fun in order to prevent them from getting bored or burning out at an early age.

Health care and common health problems for the breed 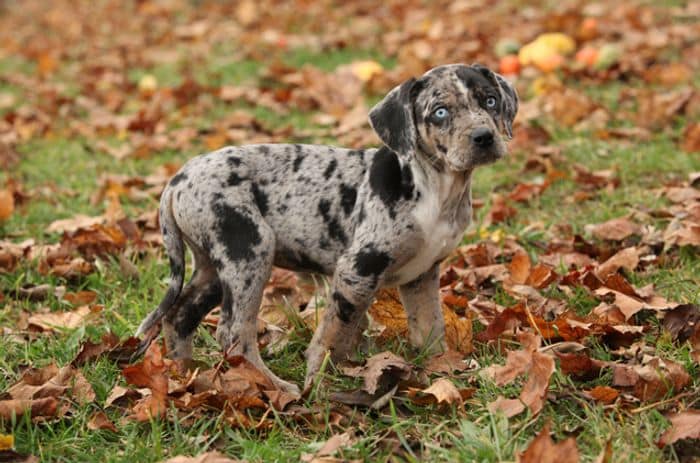 The majority of the Catahoula Leopard Dogs are very healthy animals, but the breed as a whole can be predisposed to specific ailments like deafness, eye problems or hip dysplasia.

Make sure you choose a responsible breeder when buying a Catahoula puppy, and ask for health certificates and clearance for screening for hereditary health problems of the parents and lineage.

Also, look for breeders who have started breeding their Catahoulas after they have entered maturity which is after the age of 2.

Caring for the Catahoula Leopard Dog

The Catahoula should never be kenneled or tied up outdoors and left alone. These dogs require human company and exercise and need to know you and your family as well as your home, as well as your backyard.

These dogs need at least one hour of strenuous exercise per day along with mentally engaging games and exercises.

You should start training your Catahoula pup as soon as you bring it home. These dogs are incredibly smart so they learn fast. You need to be firm, patient, and consistent, but never harsh or unfair if you want to achieve the best results. 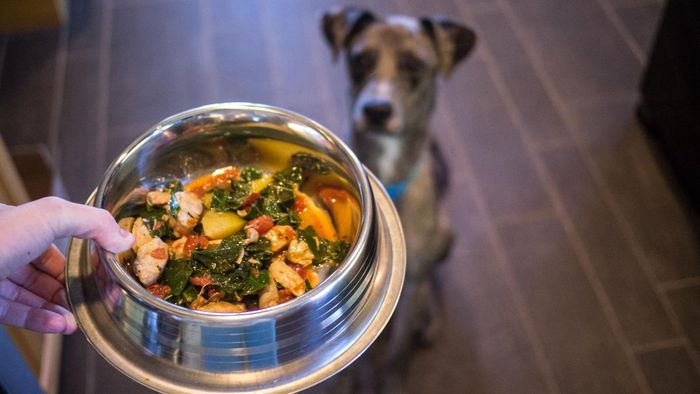 The recommended daily amount of food for the Catahoula is about 3 3/8 to 5 1/8 cups of high quality, well balanced dry food. To avoid the danger of the dog suffering from bloat, divide its food into at least two smaller meals per day, and avoid feeding it or giving it water for at least an hour after it has been running or exercising vigorously.

The Catahoulas shed lightly to moderately, so they can be done with a single brushing per week to keep their beautiful coats shiny and healthy.

You also need to regularly trim their nails to prevent injuries and overgrowth.

Bathe the Catahoula dog only two or three times a year.

Also, make sure you brush its teeth at least once in a couple of weeks and examine its ears and clean them on a weekly basis but without sticking anything inside the ear canal.

You can make grooming a much easier and more fun experience for you and your Catahoula if you teach it to tolerate it from an early age.

Socializing the Catahoula Leopard Dog with pets and children 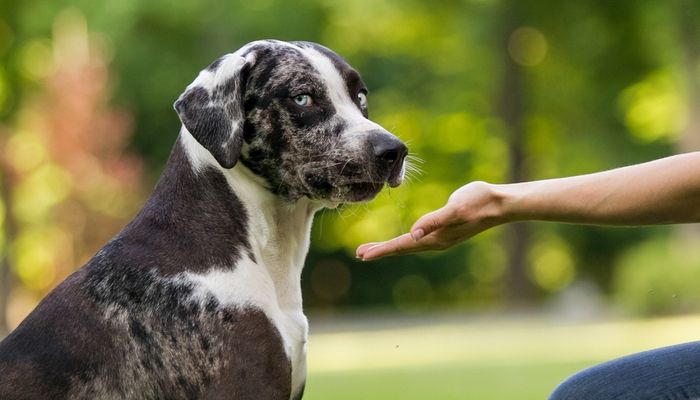 These dogs are great with children but are not babysitters. They are large and energetic dogs and can accidentally hurt a small child during rough play, so you should always keep an eye on their interactions with children.

Some Catahoulas can live perfectly with other dogs and even with cats at home, but others will not accept sharing a home with other pets.

In order to ensure that you Catahoula learns to socialize properly, you should start meeting it will all kinds of people, friendly dogs, and animals, as well as taking it to different places as soon as it is safe to take it out to meet other dogs.

Rescuing a Catahoula Leopard Dog from a shelter

Please check your local shelters for Catahoula Leopard Dogs up for adoption before you proceed to buy one!

If you decide to buy a dog from this breed, always choose a reputable breeder who is willing to show you all the health clearances and records of the parents and lineage of the dog.

If you want a dog that has already outgrown the destructive puppyhood stage, then a rescue group or shelter is a great place to look first.

The Catahoula Leopard Dog is a unique, rare dog breed, which is rarely seen outside of the US. Named the state dog of Louisiana, the Catahoula is an incredibly beautiful, strong and hardworking dog with an appearance like no other dog breed.

With proper training, socializing and care, and exercise, you can end up with a lifelong loving companion if you decide to a Catahoula to your family!

Latest posts by Ina (see all)