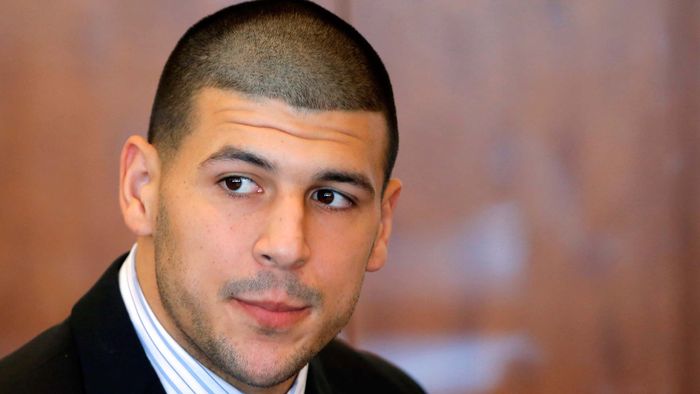 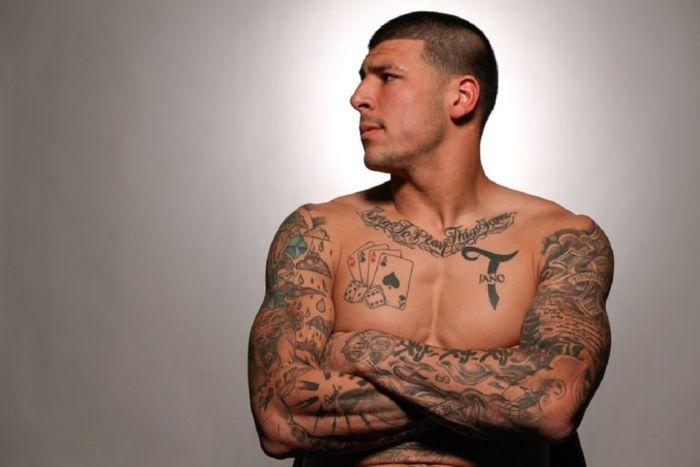 Aaron Hernandez was born on November 6, 1989, in Bristol, Connecticut. Hernandez is a famous football player who was an All-American at the University of Florida. As a tight end, he became a part of a very dynamic and effective New England Patriots offense upon entering the NFL.

Hernandez seemed to be poised to become one of the most successful tight ends in the league until his career went off the rails.

He was arrested and charged with the first-degree murder of a man by the name of Odin Lloyd in June of 2013. This man was a semi-pro football player and had a relationship with the sister of Aaron Hernandez’s fiancee.

Hernandez was also indicted in 2014 and linked to two murders that were related to a drive-by shooting in 2012. He was convicted of the first-degree murder of Odin Lloyd in April of 2015.

Aaron Hernandez was acquitted of the 2012 murder charges that were related to the drive-by shooting in April of 2017. Only a few short days later, Hernandez committed suicide. He committed suicide in his jail cell on April 19, 2017. After Hernandez passed away, the judge erased his 2013 murder conviction.

This is due to a law in Massachusetts that says that convictions are to be vacated when the defendant dies before being able to have his or her appeal heard.

It was revealed in late 2017 that Aaron Hernandez suffered from an advanced form of CTE, a severe degenerative brain disease that has been linked to head trauma.

On November 6, 1989, Aaron Michael Hernandez was born. He was born in Bristol, Connecticut, and wound up playing basketball in high school before ultimately focusing on football. He started out playing basketball for Bristol Central High School and also played on an AAU team that was coached by Geno Auriemma, the University of Connecticut’s women’s coach.

His focus turned to football, and he managed to win All-State honors by leading his team to the 2006 Central Connecticut Conference Southern Division Championship.

There was a lot of interest in Hernandez as a college football prospect, but he eventually landed at the University of Florida.

He became the star tight end of the University of Florida college football team.

Hernandez possessed great size for his position, standing 6’2” and weighing in at 245 pounds. This gave him the ability to block for his teammates while still being able to be a potent offensive threat.

Hernandez was well known for having high speed, and his catching ability was also noteworthy.

Hernandez was an honorable mention All-American for 2008 and also won the national championship. In 2009, Hernandez was named a Consensus All-American. He managed to complete 111 catches during his three seasons of playing college football.

This was a school record for catches at the tight end position.

It was obvious that Hernandez had the proper skills to be of use to any NFL team. Despite his physical gifts, many teams were hesitant to draft him. Hernandez wound up, failing a drug test and sullying his name somewhat before the draft could take place.

There were also concerns about whether he was connected to gang activity during his youth.

All of these issues caused Hernandez to go undrafted until the fourth round in the 2010 NFL draft. The New England Patriots wound up drafting Hernandez with the 113th overall pick of the draft. They were willing to take a chance on him so late in the draft and recognized his talents. 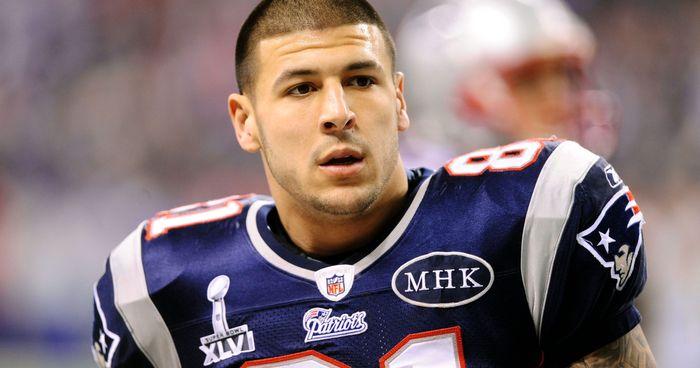 Aaron Hernandez was the youngest player in the entire NFL when he was drafted in 2010. As the season began, he managed to showcase that he was capable of playing in the big leagues. He wound up setting a team record for catches as a rookie tight end with 45.

The play of Aaron Hernandez was a big part of the team’s success in 2010, and the Patriots managed to achieve an impressive 14-2 record that culminated with an AFC championship berth.

The following year would see even more success for the Patriots. Hernandez was able to become an even more potent offensive threat when paired with fellow tight end Rob Gronkowski. The New England Patriots offense seemed unstoppable at times during this season.

Even so, the play of Hernandez had continued to impress the Patriots, and they wanted to lock him down as an important part of the team.

Hernandez was given a five-year contract extension in 2012. He didn’t have as much success during the next season due to an ankle injury that he was dealing with. Regardless, NFL analysts say that he was poised to have an even greater role on the team due to Wes Welker leaving the Patriots and Rob Gronkowski getting injured.

That 2013 season would never come to be for Aaron Hernandez, though.

The Murder of Odin Lloyd 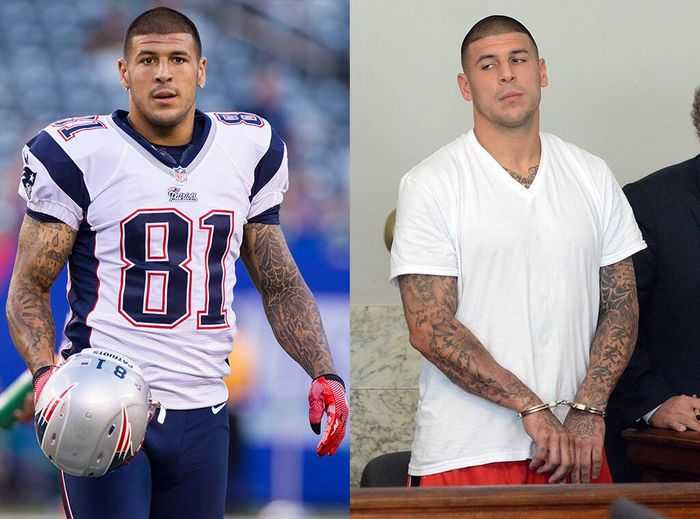 June 17, 2013, would prove to be a day that would change the life of Aaron Hernandez forever. The body of Odin Lloyd was found in an industrial park that was located only one mile from Aaron Hernandez’s home in North Attleborough, Massachusetts.

The evidence that the police gathered pointed to Hernandez as the main suspect. Hernandez took steps to try to cover his tracks, such as destroying his cell phone and getting rid of surveillance footage from his home.

Hernandez was linked to Odin Lloyd through his fiance. Hernandez’s fiancee, Shayanna Jenkins, had a sister named Shaneah Jenkins. Shaneah was dating Odin Lloyd at the time, meaning that the two men knew each other.

Eventually, the police had enough evidence to arrest Aaron Hernandez. On June 26, 2013, Hernandez was arrested and led from his home in handcuffs. He was charged with the first-degree murder of Odin Lloyd and was also charged with five firearms violations.

It only took a few hours for the New England Patriots to announce that Hernandez had been released from the team after he was arrested for murder. He was also dropped by all of his corporate sponsors soon after.

During the arraignment, details were found about why Hernandez murdered Odin Lloyd. There was an incident at a Boston nightclub where Odin Lloyd had spoken with some people who were known to be Hernandez’s enemies.

This made Hernandez angry, and he wound up killing Lloyd with the help of two friends.

Hernandez and his two friends drove Lloyd around the area in a Nissan Altima before shooting him multiple times, ultimately leading to his death.

There was sufficient evidence to link Aaron Hernandez to the murder. Surveillance footage showed that the Nissan Altima in question was present at the industrial park during the time of the murder.

There was also some footage recovered from Hernandez’s home that showed him coming back home with a gun. To add to this, the police found .45-caliber casings at the murder scene that were also found in one of Hernandez’s condos and the car.

Hernandez was even accused of another crime during this period of time. A Florida man made accusations against Hernandez, saying that he discharged a weapon and was directly responsible for him losing an eye.

He was also under investigation for his possible involvement in a drive-by shooting.

Hernandez was charged with other murder charges in May of 2014. These charges were made in connection with a 2012 drive-by shooting that occurred in Boston. Both Safiro Furtado and Daniel Abreu were killed as a result of this drive-by shooting.

Reports say that Hernandez was at the same Boston nightclub as both of these men on the night that the murders occurred. Hernandez was thought to have specifically targeted them after leaving the club, murdering them when they stopped at a traffic light.

He was charged with two counts of first-degree murder. Hernandez also faced assault weapons charges as a result of this case. Hernandez’s lawyers proclaimed his innocence in this case and awaited their day in court.

There was no possibility of parole. Eventually, Hernandez was acquitted of the two counts of murder in the drive-by shooting case in April of 2017.

A few days after being acquitted of the two murder charges, Hernandez killed himself inside his prison cell. The suicide occurred on April 19, 2017. They found him hanging in the cell, and he had used his bed sheet to do it.

After his death, the judge erased his murder conviction due to a Massachusetts law that convictions are to be vacated when the defendant dies before an appeal can be heard. 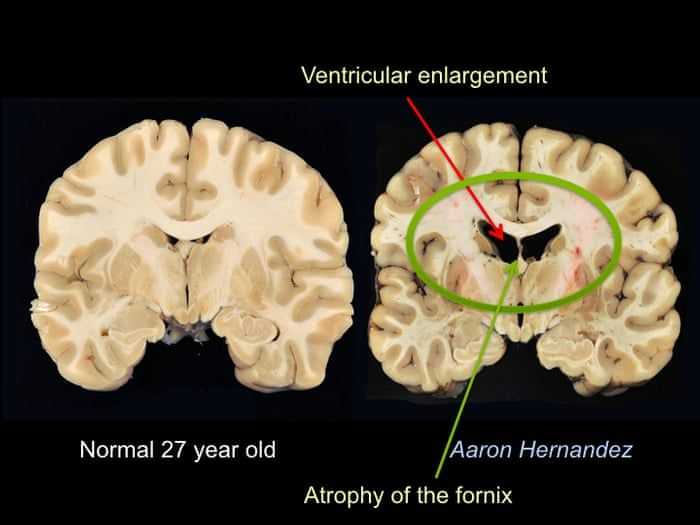 Later in 2017, it was discovered that Aaron Hernandez was suffering from an advanced form of CTE. CTE is a degenerative brain disease. This disease has been associated with mood swings, difficulties controlling aggression, and dementia. Doctors went on record, saying that Hernandez’s case was the most severe that they had encountered in someone who was only 27. 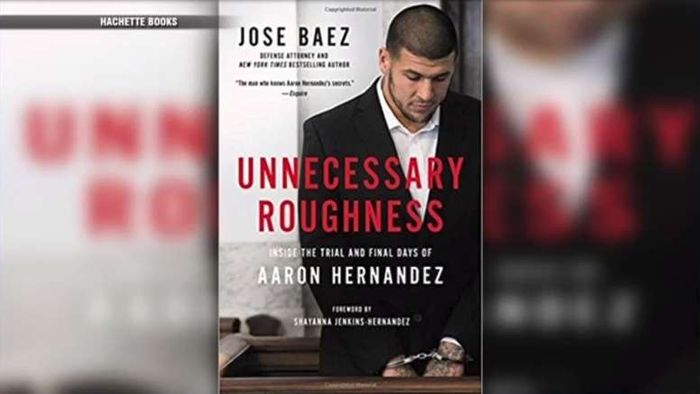 Interestingly, the story of Aaron Hernandez caught the interest of renowned mystery novel author James Patterson. Patterson was intrigued by the unusual story of an American football star who lost it all in such a bizarre way.

The best-selling author decided to write a book about the Aaron Hernandez story entitled All-American Murder: The Rise and Fall of Aaron Hernandez, the Superstar Whose Life Ended on Murderers’ Row.

The book became a #1 New York Times bestseller for twelve straight weeks. This book takes a deep look at Aaron Hernandez’s life and covers the story of the murders. Patterson used his compelling writing style to create a page-turner out of this real-life grim situation.

Several other books have been written by other authors examining this case and the bizarre end of Aaron Hernandez’s life.